Question: I am ready to leave my abusive partner, but feel torn. While we have a very toxic relationship he is such a great dad to our two children. I know they would be extremely upset if I left – even possibly angry and resentful towards me. Should I stay for the sake of my children?

Many survivors with children find themselves facing this issue. One of the common reasons victims do not seek services or leave their partner is due to feeling they are a “great parent.” Although someone can be in an abusive relationship and not directly abuse their children, abuse in the home affects children dramatically. Just because a parent does not abuse a child because they aren’t directly physically or emotionally hurting them doesn’t mean the effects of violence in the home are mitigated. In fact, children just seeing and hearing the abuse (whether parents realize they are or not) will cause them to suffer many effects.

First, these children have to keep the “secret” of the abuse in the home. They are often anxious and fearful, waiting for the next outburst or act of violence. They don’t know what will cause abuse to happen, and never feel safe. They may also blame themselves for the abuse. Their family life is chaotic – the abusive partner is focused on controlling, and the non-abusive partner is trying to survive. Both situations leave the parents absent from their child’s life. Children may also feel resentful towards mom for (what they see as) triggering the abuse, and dad for the violence. Kids exposed to abuse also may experience increased anxiety, depression, nightmares, difficulty concentrating, increased aggression, intense worry about the safety of a parent, separation anxiety from a parent, sleeplessness, bed wetting and high activity levels. Infants and children also have so much added emotional stress that it can harm the development of their brains and impair cognitive and sensory growth. In addition, abusers may also put the non-abusive parent down in front of the children and encourage the kids to align themselves with the abuser. Kids start to see the non-abusive parent as “weak” and feel resentment and anger against them. 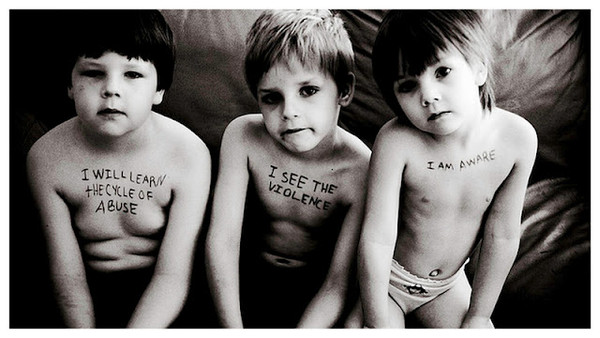 As many as 275 million children worldwide are exposed to violence in the home. These statistics are staggering! Children who grow up with domestic violence suffer long-term effects, including: physical health problems, behavioral problems in adolescence, and emotional issues into adulthood (depression, anxiety, PTSD).

Children exposed to violence in the home are much more likely to become perpetrators themselves. Their model of what a relationship is revolves around violence, power and control. They learn early on how to use violence to dominate in relationships, and as referenced earlier, may be encouraged to engage in these behaviors as children. While not all children will become abusers that are in violent homes (many children try to step in and stop the violence themselves which in itself is detrimental), they are still learning the foundations of how to have a relationship and also are suffering from the mental and physical aftermath of growing up with abuse all around them. While a partner may not actually lay hands on the children, the effects are undeniable and harmful. The exposure and relationship modeling are enough reason to remove your children from the situation. While children may not understand the decision to leave at a young age, the non-abusive parent can seek outside resources (counseling, therapy, etc) to help them work through the transition. Safe Haven has a designated Youth Advocate as well as a therapist and case manager who can work together to help families through these transitions. Overall, someone removing their children from an abusive relationship is showing their children the first step into building a life that is positive and healthy, and that is the lasting impact you want for your family.