For Family and Friends

If you know someone who has been abused, start a conversation

Watching someone experience abuse is challenging, especially if that person is someone you know and love. Abuse is about power and control, meaning there may be a clear imbalance in the relationship where one partner has or ends up with more power and control over the other.

Conversations with a survivor about their situation can be hard: they may not want to discuss the abuse they’re experiencing for any number of reasons, including fear, shame, or even concern for their partner who has abusive behavior.

If you’ve noticed warning signs of abuse affecting someone in your life, your instinct may be to intervene or even “save them” from the relationship, but it’s never that simple. Knowing how to have conversations that empower survivors to make their own decisions is one of the most important ways you can help someone in an abusive relationship reach a safer place.

Discussing relationship abuse with someone who is actively experiencing an abusive situation is never easy. While every situation is unique, there are several basic ways to facilitate affirming conversations that meet survivors where they’re at.

Why do Victims Stay?

When it is a viable option, it is best for victims to do what they can to escape their abusers. However, this is not the case in all situations. Abusers repeatedly go to extremes to prevent the victim from leaving. In fact, leaving an abuser is the most dangerous time for a victim of domestic violence. One study found in interviews with men who have killed their wives that either threats of separation by their partner or actual separations were most often the precipitating events that lead to the murder.

A victim's reasons for staying with their abusers are extremely complex and, in most cases, are based on the reality that their abuser will follow through with the threats they have used to keep them trapped: the abuser will hurt or kill them, they will hurt or kill the kids, they will win custody of the children, they will harm or kill pets or others, they will ruin their victim financially -- the list goes on. The victim in violent relationships knows their abuser best and fully knows the extent to which they will go to make sure they have and can maintain control over the victim. The victim literally may not be able to safely escape or protect those they love. A recent study of intimate partner homicides found 20% of homicide victims were not the domestic violence victims themselves, but family members, friends, neighbors, persons who intervened, law enforcement responders, or bystanders.

Additional barriers to escaping a violence relationship include by are not limited to:

In addition to individual obstacles victims face when escaping violent relationships, society in general presents barriers. These include:

Safety Plan for a Friend, Relative, or Co-Worker Who is Being Abused by an Intimate Partner

This plan is based in part on research findings. Since the overwhelming majority of victims are female we have written this safety plan as if the woman is the victim and the abuser a male. However, victims and perpetrators can be of either sex, and domestic violence occurs in same-sex relationships.

by Officer Randy White 8321* and Joan Zorza, Esq., Domestic Violence Report, October/November 2010
*Randy White is the Subject Matter Expert for the Oakland Police Department’s Domestic Violence Unit. An officer for 10 years, he works with the Family Justice Center in Oakland, CA and can be reached at rwhite@oaklandnet.com or (510) 587-2526.

Tips for Helping a Friend Experiencing Domestic Abuse During COVID-19 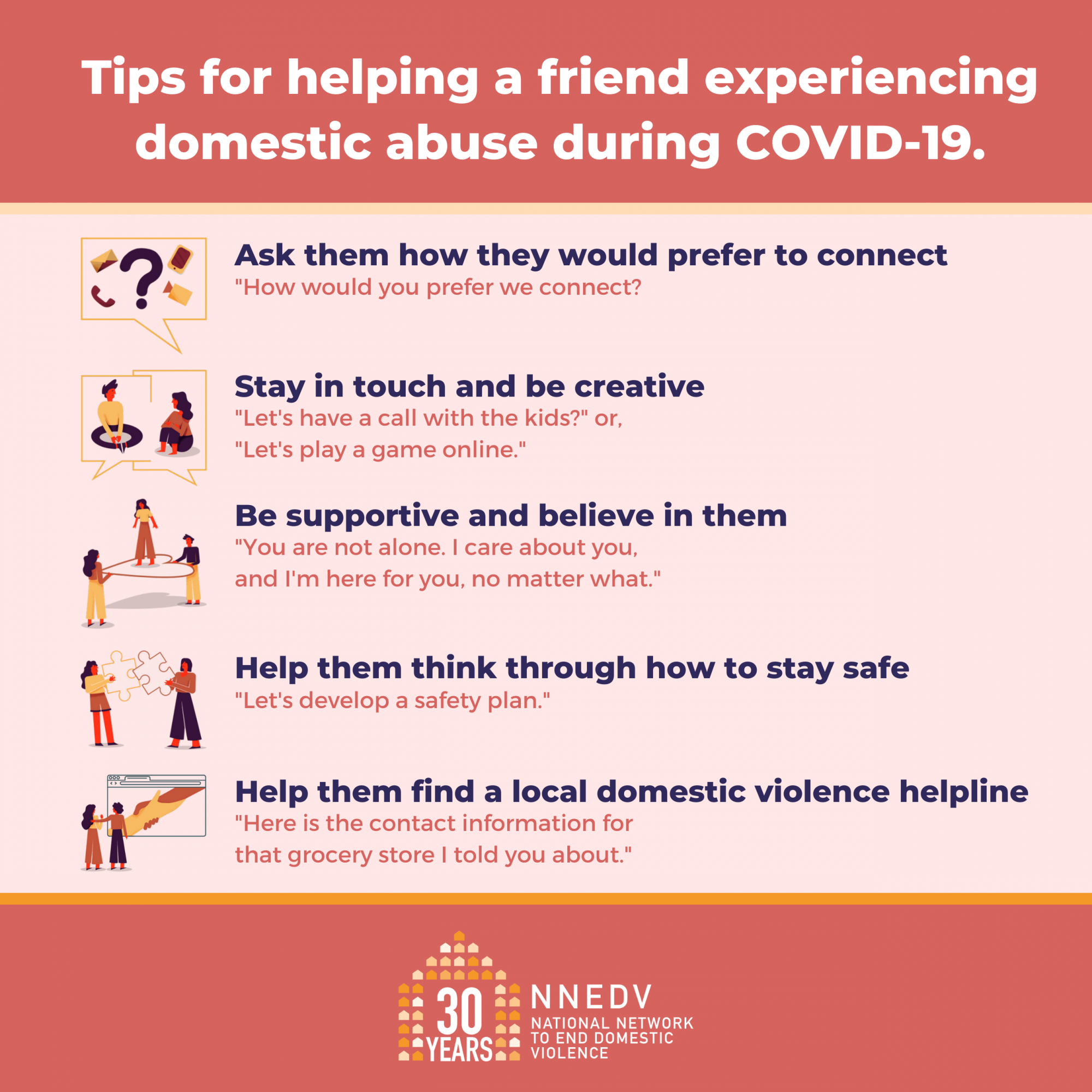