For Family and Friends

How to Help Someone You Care About 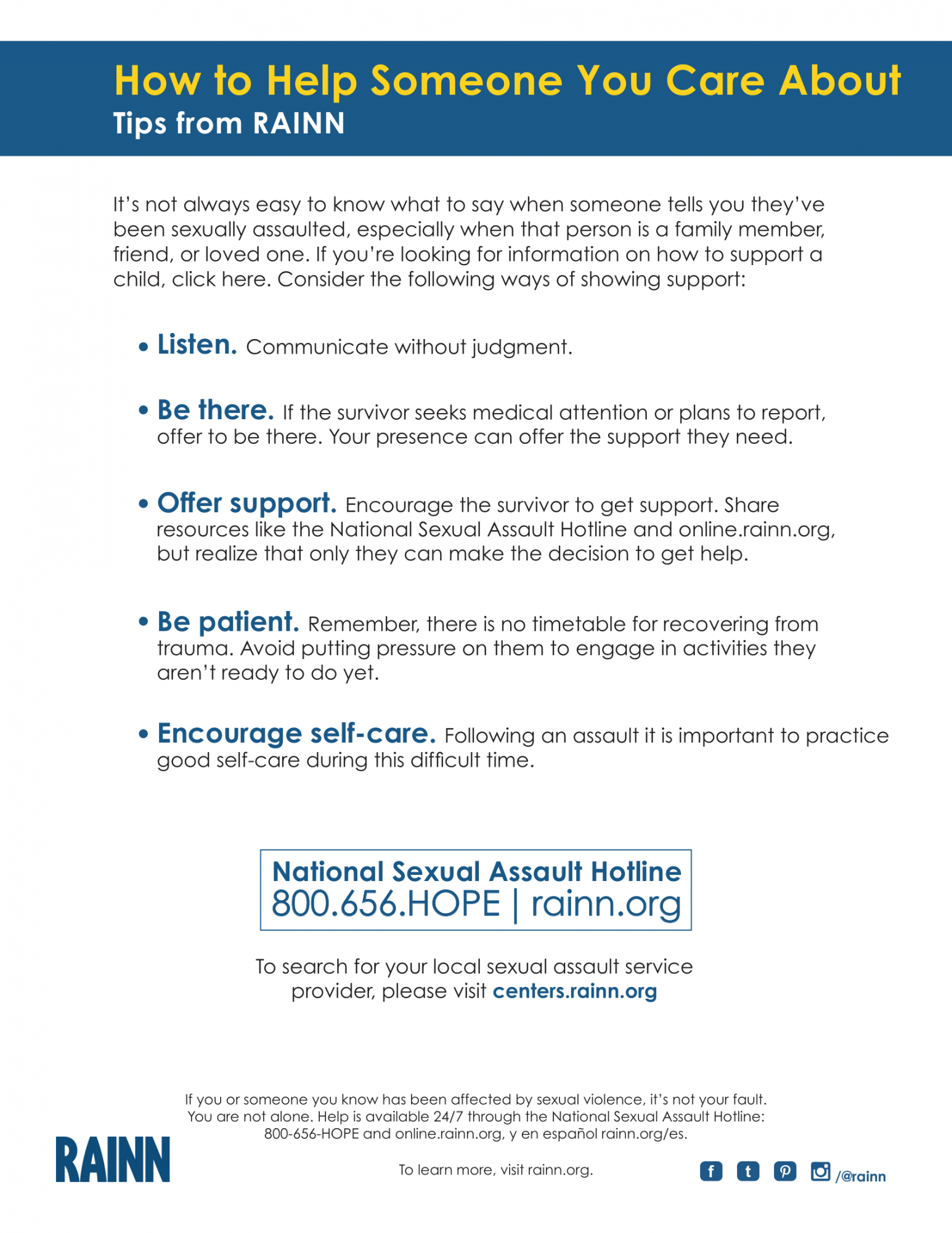 Supportive things to say to a survivor

“I believe you” and “It took a lot of courage to tell me about this.” It can be extremely difficult for survivors to come forward and share their story. They may feel ashamed, concerned that they won’t be believed, or worried they’ll be blamed. Be careful not to interpret calmness as a sign that the event did not occur—everyone responds to traumatic events differently. The best thing you can do is to believe them.

“It’s not your fault” and “You didn’t do anything to deserve this.” Survivors may blame themselves, especially if they know the perpetrator personally or were under the influence of alcohol or drugs when the assault occurred. Remind the survivor, maybe even more than once, that they are not to blame.

“You are not alone” and “I care about you and am here to listen or help in any way I can.” Let the survivor know that you are there for them and willing to listen to their story if they are comfortable sharing it and that you do not judge them for what happened. Ask them if there are others in their life they also feel comfortable going to, and let them know about the help that is available through the National Sexual Assault Hotline.

“I’m sorry this happened” and “This shouldn’t have happened to you.” Acknowledge that the experience has affected their life. Phrases like “This must be really tough for you,” and “I’m glad you felt you could share this with me” help to communicate empathy.

Sexual violence affects people of every gender identity, and sexual orientation. People who identify as part of the lesbian, gay, bisexual, transgender, and queer (LGBTQ) communities also experience sexual violence, and may face different or additional challenges in accessing legal, medical, law enforcement or other resources than other populations.

Ways you can support LGBTQ survivors

Sometimes it’s hard to know what to do when someone you care about tells you they have experienced sexual violence. The reaction of the first person a survivor discloses to can affect if they choose to tell others or seek additional resources. Remember to listen without judgement, acknowledge the difficulty of what they went through, and tell them that you care about them.